The Good, Bad and Ugly

Here's humanity at its best, at its worst, and at its craziest. 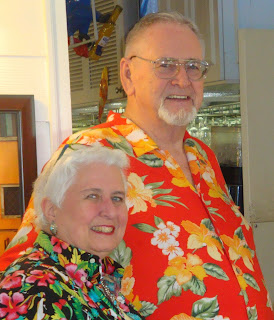 The Good and Crazy: This is sharecropper and humbug who were married on her birthday a couple of weeks ago. Local friends were invited for a party that became a wedding. The food was good, the company laughed a lot, dress was casual, and we all had a lot of fun.
Humbug and I met 53 years ago in Bermuda. When my Dad was transferred two years later, his father (who shared the building with the post office) destroyed all correspondence between the two of us. Each thought the other had deserted.
When his wife died early this year after a long illness, he began searching for me to apologize (His brother told him what father had done.). I was looking for someone who deserved an apology for me. We were both looking on MyLife. I saw a tab that said, "Who's looking for you", and laughingly clicked on it. His name was at the top. I quickly switched to FaceBook and checked out his profile. Everything fit, and he had left a message for me. So, I wrote him. And, he wrote back.
The Ugly: I was still in a relationship at this time. We had been in couples counseling for two years - doing better, then falling backwards, sometimes farther back than we had been. I was two steps ahead of the counselor who was two steps ahead of my partner. I knew the relationship was over and had planned how I might be able to leave (alone, I am a bag lady), but I had done nothing. After I began emailing with humbug, I asked for a separation. Then I met humbug halfway between our homes.
The Crazy: When we met, we looked at each other for a few moments, he opened his arms, I stepped into them and laid my head on his chest, and I felt as if I had come home. I had kept all his drawings, his notes, the diary, his photos. He had kept me in his heart.
The Ugly again: I went home and told my partner that our relationship was over and asked her to release me from my vows. She did. I began to pack. I asked humbug to come and help me. He did.
Long story shortened. In less than three months, I was out of one relationship and into another. Moved...well, almost all of it. Shifted my bisexual orientation from female to male. Asked for part of the joint properties that my partner and I had owned, been granted some of what I asked for in money and all of what I asked for in "stuff". My partner was stunned, shocked, embittered, grieved, angry and all of those things you would expect...and with reason. As I said before, I was at least four steps ahead of her in ending the relationship anyway. I regret that I could not have taken it slower and been more kindly.
Now, I live in a retirement community in a state I said I would never live in again, married to a man I never expected to see again, and I am happy. For now, the empty holes in me that I tried to fill with things and spending seem to be gone.
Posted by sharecropper at 8:39 AM 5 comments: