Contemplative thoughts about myself

Balance, things that bring you joy, fears, etc. That was my marching orders from my therapist last Monday. Now that I'm alone at the beach, I'm spending way too much time thinking about myself (Lee, that's directed thinking. When I'm alone in my mind without direction, I feel like I'm alone with an insane person.)

I've tackled mind mapping about creativity, love and balance. Now I want to work on fears. I've written some notes that ended in fears, but with mind mapping, you jot down words or phrases all over the page and then you link them. And, we're not really talking about fears of spiders (which I'm not) or things like that. We're talking about fear of being rejected so much that you don't do things - you know, the kind of things that therapists like to talk about.

Interesting. When I follow a thought to its logical conclusion, nothing is so bad after all. I always feared being a bag lady because I know how uncomfortable those homeless shelter beds really are...and I hate sleeping on the ground. But, we may all be homeless soon if the mortgage companies keep making idiotic loans; so why worry about just me. We'll all be in it together, and like penguins, we can huddle for comfort...at least until the domino effect happens.

And, like most of us, I have always wanted to be loved, remembered and contacted. The internet advertisers and the bulk mailers have shown me how much I am love and how much they remember that I bought something from then sixteen years ago that they contact me regularly asking if I need birth control medicine. Mind you, I'm 63, have had my tubes tied long ago and passed through menopause at least 20 years ago.

Did you know that, although men need prescriptions for their hormonal drugs like Vi...and Cia...., women can get a pharmacist to concoct a hormone cream that stimulates their desire for sex? No prescription needed. And, with all the medicines that we take nowadays (especially anti-depressants) that could be a much-needed service. I have the name in my little red book just in case.

As you might imagine, laughter and humor are two things that bring me joy. So, keep on truckin' friends, Laugh, know you are remembered and loved (or I wouldn't bother writing this blog), and check out your local pharmacies for the hormone cream.
Posted by sharecropper at 8:43 PM 1 comment:

Yes, dear folks, I'm alone at the beach with the ocean outside the door and supposedly reflecting on the wholeness of me. The past has chiseled away at my well-being, and survival habits that should be extinct are being routed away. I could go on and on and on about how my childhood and the abuses of poverty, emotional abuse, rape, alcohol, aloneness, co-dependency and lots of other things have contributed to who I am today - and I will do that at length if anyone wishes. I still have a lot to say about how this all made me behave and misbehave.

However, my therapist is tired of having me blame my anger, depression and overeating on my childhood. Methinks and she indicates that the adult me must take some responsibility for Life. I've been procrastinating for over forty years. She claims I'm stuck.

Remember the book about "Forgiveness" - well, that was supposed to help me see where my current aberrant behaviors were once survival tactics. And, I was supposed to find alternative ways of relating to the triggers for those behaviors. Well, the list of "abuses" and "unfortunate experiences" was long. I even put it on an Excel spreadsheet and listed who was to blame, what I felt, how I reacted then, what makes me feel that way now, and how I react now. I was supposed to add that column about alternative behaviors - and I sort of did, but sort of didn't. Bleah.

Then, it was "If Buddha was stuck", and I began it, only to realize that I was reading the same stuff in a different cultural mode.

February is apparently unstuck month. Really, I've been quite content and lethargic with being stuck. Boring occasionally but basically conserving of energy. Unfortunately, my C-PAP machine, some new medication, a bit of exercise, and I'm feeling more energy. Bye, bye, energy excuse. Today the doctor prescribed antibiotics for what is possibly a long-term sinus infection. Bye, bye health excuse. My therapist promised to bring some new worksheets on Monday about being whole - looking at the big picture - integration - moving forward - coming unstuck.

Sigh. So, here I am. Guided journal in hand. "If Buddha got stuck" in hand. Previous journal in hand. The Excel spreadsheet in hand. And, my hands are full of fork and tiramisu. So far I've eaten three of them today, and a piece of pizza. Oh yeah, and a bowl of cereal. Avoidance? Who me? I'm just using one of my soon to be extinct survival techniques. Pray that 15 plus years of therapy is enough to feel whole and not just to fake it.
Posted by sharecropper at 7:31 PM 1 comment:

Does pain equal suffering? In the Bible Paul makes a big deal of suffering. Jesus, however, tries to dissuade his disciples from wishing they could be equals with him - or at least one on his right and one on his left - because he knows what suffering will ensue. Pain is a part of that suffering. Physical pain, mental pain, emotional pain, financial pain.

Pain is - well - painful. It hurts. Yet, we can become so inured to pain that we can ignore it - at least for a while. Dull aches, legs that twitch, backs that throb or mental/emotion anguish that goes on and on and on. After some length of time, we can function over and around that pain. We shrug it off as a part of life, like lost loves, deaths in the family, taxes, war.

However, that pain is with us and saps energy that might be used of other things like work or pleasure. We don't realize that we're missing some important things in life until one day, we just don't want to get out of bed. We have no meetings; we have no lunch dates; we have few internet friends; our hobby supplies are gathering dust; the exercise equipment isn't even plugged in. Then, someone asks - what brings you joy?

Yeah, right. Joy. We sing about that at Christmas. Joy to the world. Then we get a bit sarcastic and think about all the war and terror and wonder when the joy went. If we reflect on our own lives, we don't even know what brings pleasure any longer much less what brings joy.

My life is full of beginnings. My fiber projects are so numerous that I can't keep track of all of them. I make some calls to friends and promise that I will stay in touch - until next Christmas I remember that promise. Several weeks ago, I said I wouldn't start another fiber project until I finished something already begun. Didn't happen. 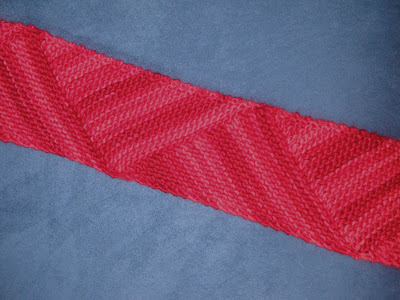 But, I did finish this beautiful scarf with variegated red yarn - or did I post this already? LOL

And, I've acknowledged that my pain drains me. Adapting to my life situation with fibromyalgia will take a lot more time. My new C-PAP seems to be helping - too soon to tell. Until now, I've been suffering. Since I have a name for my pain, I don't feel as if I'm suffering. I hurt, I ache, but I'm okay...and I'm going to better.
Posted by sharecropper at 8:29 PM 5 comments:

A charming bit of fiber antiquity 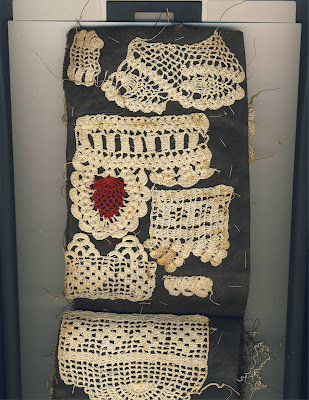 Some time ago a person gave my boss an old sampler book of crochet pieces - most of them made with thread so tiny I cannot see the pattern. Many of the samples are so aged that they are deep cream and have stains. But, a couple of them stand out - one has red thread in the center - still so bright that I wish I had a scarf that color -of course, red is my favorite and I already have five or six red scarves. Another has shades of red and green mixed with what must have been white. Another is a seafoam green, and one is a soft brown. The individual pieces are sewn onto what feels like a linen fabric, and the pages are secured with a handmade metal fastener. 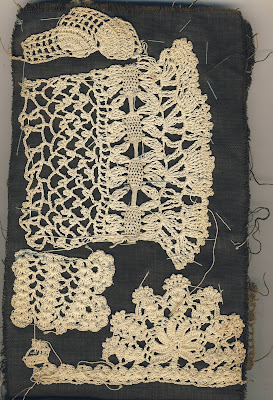 I've found that by scanning the pages of this booklet I can see some of the stitches I thought were impossible, and I'll be transcribing these pictures (some of them) into directions as the year goes on. My goal is to have completed as much of the sample book as possible by the end of the year.
Posted by sharecropper at 8:19 PM 2 comments:

Knitting at the beach 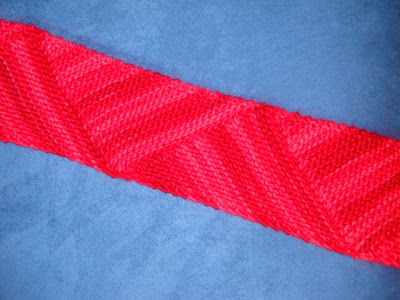 While I have been watching the ocean and listening to its waves on the beach, I've been doing handwork - crochet and knitting. We received a shipment of Lamb's Pride wool at the shop the day before I left, and I snatched up two skeins of variegated red on the way out. Here's the scarf I've begun with it - an older Noro yarn pattern that I found free on the web using short rows to make triangles. We also got the yarn in purple in worsted and bulky - so pretty. 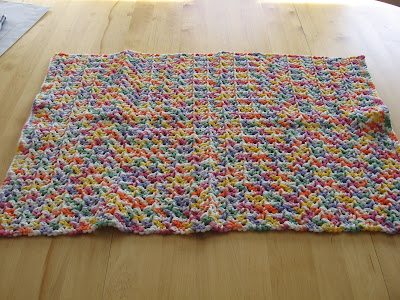 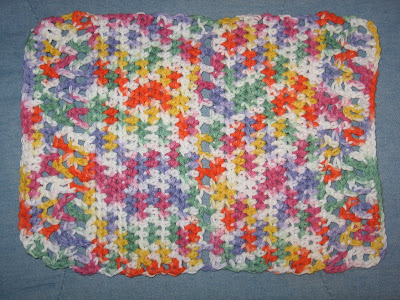 And, before I left, my friend Nita gave me a bath mat that she had crocheted from double worsted Peaches & Creme cotton. It's much brighter than the picture shows - made with Gumdrops for those of you who know the P&C colors. So, I crocheted a couple of bath cloths for myself. The first was a bit lopsided, but the second turned out nicely. Well, almost anyway. Someday I shall learn how to crochet squarely. The mat is about 18 x 24 and the cloth is 9 x 12.

I also started a baby hat with Vanna's Baby Soft acrylic in blue - doing it magic loop - have about two inches done so far. And, cast on a Ty-Dy shawl in shades of blue, green and purple...only a few rows done yet.

The body is better; I get my C-PAP (machine that keeps me from having sleep apnea) next week; I'm getting over this virus and coughing; I have a great job; I have a great partner; and I'm so blessed that I spend a lot of time in prayers of thanksgiving. May 2009 bring the same joy for you.
Posted by sharecropper at 2:55 PM 2 comments: