This area has a plethora of water fowl - shore birds, lake birds, marsh birds - and I love them all. My smallish digital camera has a 300x zoom, and it takes such great pictures - correction - I take such great pictures with it. I've learned to lean against a tree or some other stable object to take distance shots. And, I've learned where to place my hand so that it braces the camera without covering the lens or interfering with the zoom...and without turning it off accidentally. I'm learning again about light and dark and all the things that go along with good photography. I still remember all the things I learned about black and white photography in the mid-1960s and later in 1979, but I don't need to know how to "dodge" or "burn" with digital. Or do I? Mostly, I shoot on automatic with a setting to steady the movement of the camera. 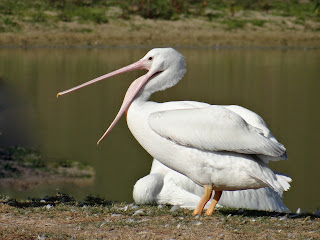 But, I really love Adobe's Photoshop Elements. This marvelous bird is the center of attention, but the original shot included another bird's tail and wing on the left of the picture. With Photoshop Elements, I "healed" that picture! Zap, the offending bird image is gone, replaced by something that vaguely resembles an alligator but is probably taken from the shoreline above.

And, I can make a dull picture look as if it was taken on a sunny day or totally smear the background to appear as a portrait. Oh, I love it.

I can even put a watermark on the picture to indicate my ownership and copyright - Well, I could if I could figure it out. Yesterday, I tried that. I could get it onto the pictures, but I couldn't put it where I wanted it to be on each picture; so that's a task for another day.

When I was making these pictures, I was seated on the ground 30-40 yards from the birds. The sun was bright and warm, and I couldn't see the viewing screen on the camera; so I was taking pictures using the viewfinder. Unfortunately, I can't do that with my glasses on. And, without my glasses, I can't see clearly what I'm framing nor the exact content. I seem to get some lucky shots even so. I've never seen a pelican with its beak open! And, you can see where the bird's neck is pushing the soft part of the beak out. This is funny! 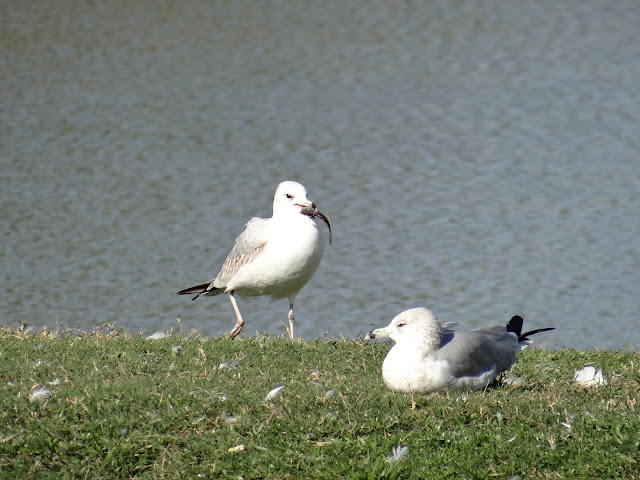 And, check out this tern with a small fish in its beak! I couldn't see that. Nor could I see what this wood stork had when I photographed it a week ago. And, look! It's a fairly large fish. Large enough that the stork had to carry it up the bank so that it wouldn't flop back into the water. Astonishingly enough, the other storks did not pester him for his fish. I've seen birds fighting in the water for fish. 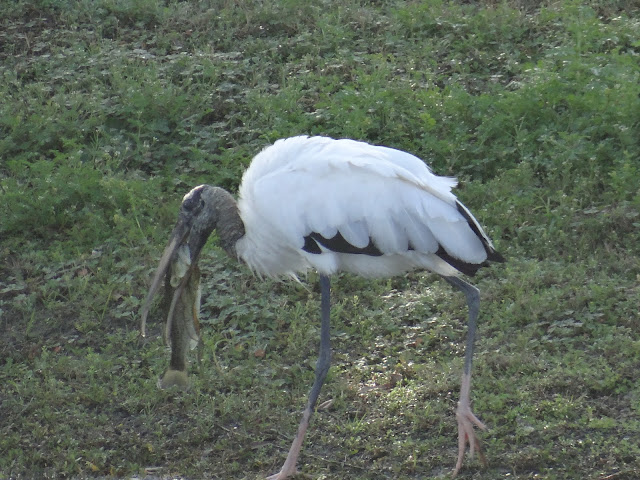 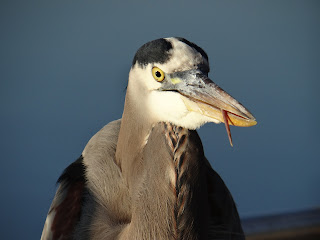 Here's another lucky shot! I was at Lake Miona talking with a fisherman early one morning (after eating a great sausage biscuit at Hardee's in Wildwood, FL) when a heron jumped onto the pier and began making cheeping noises. The man explained that the heron was Bert who liked to eat those fish that were caught but not okay enough to survive going back into the lake (catch and release). I noticed that Bert's tongue kept flicking out as if he was licking his lips. So I got him in close focus and said, "Okay, Bert, stick out your tongue again." He did!! Isn't he funny?