Back 50 years ago this June 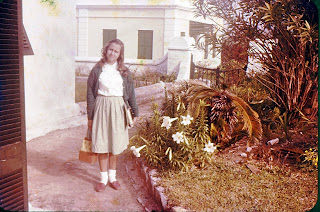 Preparing to travel back in time requires a lot of thought. We are going to Bermuda at the end of May. I lived in Bermuda in 1957-59 while my Dad was stationed there with the Navy. I had my first date there, my first real boyfriend, my first formal dance, my first crush on a Marine, and my first real joy and freedom. I also discovered that worship could be fun as opposed to the solemn Presbyterian Church that we once attended while living on the farm.

Now, fifty years later, I will visit the places where I grew up and found freedom and laughter. The bicycle path has been turned into a tramway, I’ve heard. I spent many wonderful hours there – alone riding along the roadway between the coral walls and the bay – safe. The island is 19 miles long, and I’ve ridden my bike from one end to the other – not in a race kind of way, but meandering and looking at the people and the houses and the flowers.

I recently found a stash of slides from that period, and I thought, “Oh, goody, I can get these made into prints and be able to compare what it was like then to what it is like now.” Wrong. My parents seemed to take pictures only of me; so all I get to compare is a 13 year old girl with long brown hair to a heavyset white-haired woman. Mom was never one to waste film; so every picture of me has some facet of the island – the Easter lilies, the Poinciana tree, the old mulberry tree for which our cottage was named, the pink walls of the telephone company across the street, Mr. and Mrs. Cook in their black car, Scaur Hill Fort with me climbing around on top of the walls. Not for nothing did my daddy call me “Monkey.” Bermuda shorts and knee socks, school uniforms, a teenager’s room with a stop sign in the background.

Of course, most of the slides were Ektachrome which fades to an ucky orange. But, I bought the most wonderful, and cheap, little Canon scanner that corrects the color - mostly anyway. In the picture above, the building in the background is the telephone company across the street, which is pink, not white. But, hey, at least I'm don't look jaundiced any longer! Yea! Technology. 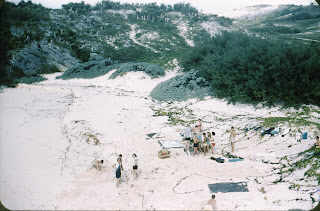 But, I do have a few pictures of scenery – the dock where the fishing boats pulled in, the beach near our house, a few friends from the local school (and I even remember their names), a beach party. My heart knows what the pictures don’t show, how the roads wind, and how rough the coral walls are when you run into them. How the shutters keep the houses cool in spite of no cooling system, the wind that blows all the time, the quick rain showers, the Gombey dancers.

You can never go home again, right? But, maybe in my mind, I can take a step back in time for a few moments to remember what growing up was like there. Growing up in Mississippi was horrible, but Bermuda was wonderful...a blessed two years to learn that the rest of the world is not a drunken father, a codependent mother, and a dirt-poor farm in a beautiful but dying state.

So, I’m making a deal with God about getting me well and about not starting the hurricane season too early. Well, I’m asking; I don’t know what I’d use as my end of the bargain. I doubt there’ll be any smoking pots or split carcasses to assure our pact. But, the way they barbecue down here, one never knows.

Hope your hearts are sunshiny even if your weather is not.
Posted by sharecropper at 1:25 PM

Share Cropper, May would be early for a hurricane. The mere mention of them gives me the shivers. Last year we were spared even a scare. What will hurricane season be like this year?

I pray you will have a great trip to Bermuda, and that you will find that you can go home again.

Going back can be so bittersweet. May God go with you, and remind you of every good memory.

In the meantime, you've been tagged, over at No Claim to Sainthood.