Joanna over at the Geranium Farm wrote today about all the temptations that we face and rephrases the Lord's Prayer to emphasize that God lead us away from temptation - an interesting thought. 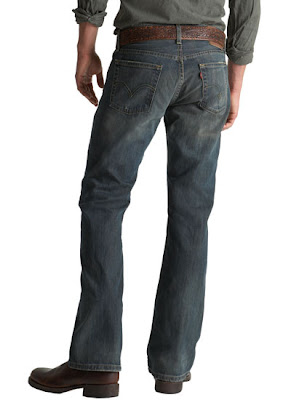 One of my favorite bits about temptation is a phrase from "Somebody's Knockin'" by Terri Gibbs -
Somebody's knockin' should I let him in,
Lord it's the devil would you look at him
I've heard about him but I never dreamed,
he'd have blue eyes and blue jeans. Thanks to Levi's for the picture!
Evil and Satan are undercover agents - literally and figuratively. I always wondered if the reality of what was under those blue jeans was as real as promised. Now, I recognize that temptation comes in all sorts of disguises, and they are seldom evil at first appearance.

eBay is a wonderful example for me. I began looking on eBay for an out-of-date coffee mug for my partner. Then, I realized that others things were available at the touch of an icon. I need only input my credit card number to PayPal and go shopping. Now, we all know that shopping is one of my weaknesses - my retail therapy, my way of stopping the pain. And, the thrill of getting down to the wire in a bidding "war" to the last few seconds - ah, me. The innocuous eBay was my own temptation. After dozens of packages arrived, I realized what I was doing. I have not turned my back on temptation, but I can look it in the eye and said, "NO." Most of the time.

Laughing. So temptation comes in all guises. Food is another of my weaknesses. Today, I was out after therapy. Spent $26 and almost two hours in the bookstore. Then on the way home, I decided I'd like to have a Coke from the Mexican store near the interstate. So, I purred over there and bought two Mexican Cokes - made with real sugar instead of high fructose corn syrup - sooooo good. But, one of my favorite eateries is in the same area; so I sauntered down there - past the soon-to-be-open bakery where I used to buy cupcakes - and bought two cranberry muffins (probably just as many calories as the cupcakes). To make a long story short, I ate one of the muffins after I got home and automatically reached for the other one. God led me away from temptation right then. I put it down, folded the top of the bag and put it out of sight. For right now, I have had a reasonable amount. If I had eaten both muffins now, I would have been stuffed. If I eat it tonight or tomorrow morning, I will have done better.

Temptation. At therapy we talked about a problem I have contacting an old friend, who is dying of cancer. How do I tell her that just talking with her brings back memories that are more painful than I care to handle? I've been through therapy about these and I've forgiven and been forgiven, but the pain is still very real. It doesn't go away just because I understand it. I've left the situation with God and the pain still shows up with the memories. I know how I felt then. My therapist asked if I really needed to say that to her. The knowledge that her very presence in my life brings pain will not make her feel better, and I won't feel any better knowing that I have hurt her; so why say it to her? Let it be. Time will ease the situation and I will know what to do. But, I have been tempted to say, Just go away, Don't make me think of this stuff any more, Quit calling, I have nothing to say. So, if I have nothing to say, then I shouldn't say it. Temptation. Try to ease my own pain at someone else's expense. Giving in to temptation seldom works anyway - you're just miserable afterward.

How does your temptation appear? Blue eyes and blue jeans, speaking when being silent would be better, two muffins? eBay? Credit cards?

Lead me away from temptation - or at least help me to recognize it, Lord.
Posted by sharecropper at 3:34 PM

excellent post- and I have to say that internet shopping is a real temptation, I need to look it in the eye and say NO!!! Welcome to revgals btw :-)

Mine... too numerous to list but I do enjoy the muffins.

Welcome to RevGals, and thanks for the meditation on temptation. The muffins, yes, and online bookshopping -- so unnecessary since I can walk to a bookstore!

The muffins...definitely the muffins.
You're from Clarksdale? I'm from Greenville. Your "then" photo is very evocative.