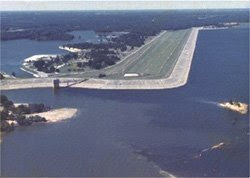 Well, I was just looking at a picture of the spillway on a lake near Pseudopiskie's place, and it reminded me of many happy times at Sardis Lake/Dam in Mississippi. It was the largest earthen dam until the Aswan Dam was built in Egypt. And, I remember sleeping in the sand on cool nights when I'd be on my way from Memphis, TN, to Mom's house. You burrow out a body sized spot in the warm sand and cover yourself with a blanket to keep the warmth in. Of course, you froze your tootsies off the next morning as you went down to the water to wash the sand off your feet and legs (since you were wearing a dress back in those days).

And, I remember playing around the spillway as a child and watching how many large fish were being caught. The beaches were wonderful and I always wanted to roll down the grassy embankment (long green strip in the picture) naked until I hiked myself up there one day and discovered that the soft-appearing grass was about six inches to a foot high and the embankment was broken with drainage ditches. That would have been one very uncomfortable roll. But, it looked so beautifully green and inviting.

My experience was mostly in the lower lake (left side of picture) below the spillway where we would have family gatherings. The adults would fish and tell tall tales, and the youngsters would run around all over that part of the park (now much larger I'm told) chasing one another, playing around the spillway after being cautioned not to go over there. We'd talk to the people who were fishing, and it was the only place I remember that segregation was not practiced then. Old black ladies and old white men sat side by side on home-made stools with their poles in the water...sharing tales and bait. I ahve some pictures of the spillway back then, but I'll dig them out later. Meanwhile, the photo at the top is from the official site - and it's mostly of the upper lake.

Beautiful drive if you're ever down that way.
Posted by sharecropper at 6:46 PM

What is it about kids and grassy terraces? We loved to roll down the terraces in front of the houses on the street behind us but we were usually caught and stopped. Neighbors directly across the street had buckeye trees so they didn't have be concerned with us but one house in particular down the block had especially inviting grass and eventually fenced it.

I still don't know why we weren't allowed to roll. We rarely damaged the grass. We did far more dangerous things than that and nobody sued anybody then. We had to be responsible for our own stupidity.

The park keeps our dam mowed. People sled down the face of our dam in winter. There are two hellish bumps which require tying down glasses and hats. There is a side run without the bumps. It isn't as "challenging" but you can get a really long ride if you hit the bottom just right.