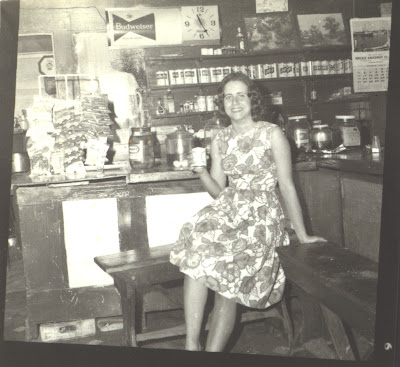 At age 19 at the C&G Bar in Columbus, Mississippi

On my 20th birthday, I went to Memphis to visit my former roommate and other friends. The weekend was our usual laughter and fun including a road trip to one friend’s home in Arkansas. On the way back, she gave me a fur stole as a birthday present. I was a tailored girl/woman then; so that was a magnificent gift for me. And, living on a farm where we hunted animals and had friends who were trappers, I thought nothing of the significance of the fur.

Sunday came, and I realized that I had to leave this friend, a woman named Wanda. I did not want to leave. I had watched her leave Memphis too many times for Arkansas or Arizona, and I had grieved. I realized I was in love with her. We formed a relationship then that took us to Mississippi (where my mother said, “Is Wanda your boyfriend now?”), to Arkansas, to Arizona and back to Memphis – several rounds of this. My first lesbian experience.

Wanda was cute and butchy – we had butches and femmes back then, and when we went somewhere I usually wore a dress and she wore slacks and shirt. A nightclub north of Memphis near a state park was a frequent weekend stop. This was hidden in the woods so that the Memphis Vice Squad would not raid the place. We met lots of lesbians and gays there. However, Wanda was a wanderer, and I followed along – getting and quitting jobs along the way. Finally, I realized that she was and had been two-timing me with another woman for many years.

I went home to Mississippi and curled up and wanted to die. Fortunately, I didn’t. I visited another friend in Memphis, and she took me to a gay bar where I met a woman who became my next girlfriend. I moved to Memphis and we lived together in an apartment where other gay couples also lived. I got a great paying but mindless job with Pepper Sound Studios. They made jingles for commercials in return for advertising time on radio and television stations. I was keeping track of what played and how to bill it to our customers. Then, someone realized that I had only women friends. They saw someone pick me up at work. And, I was fired. I did not fit their family image.

I worked with a job placement agency, and my counselor tried to find me another job that paid as well…to no avail. I did temporary work for a bit, then worked as a draftsman for a city planning firm for a while. Finally, she found me a position with an insurance company. I worked there for six months before the boss’ secretary called me at a doctor’s appointment and told me I was fired. I did not fit with the family nature of the company.

I felt dirty and abused. I felt like my nature marked me as the devil. Everyone liked me until they discovered that I was gay. And, that discovery was not difficult. I had a lot of friends who were what was called then “stone butch”. Transvestites is the term used now...or transgendered. That meant that they dressed and acted as a man, binding their breasts, getting male haircuts, even some padded their pants. I had some friends who were very butchy and despite their breasts and hips dressed as men. In the 1960s that was not acceptable. Even wearing jeans wasn’t. I wore dresses to work every day. Being a lesbian meant that you carefully considered every place you went – would you see someone from work, did you look too butchy, who was going along, how dangerous was it to go there from the standpoint of being beaten up? Women's softball leagues abounded, and we were safe there.

The Memphis Police Vice Squad regularly raided the gay bars – dragging off to jail those who were thought to be dressing too much like the opposite sex, anyone displaying affection, dancing with a person of the same sex, using the ladies room if you were a man, or anyone who talked back to them. I believe those laws that the vice squad enforced in gay bars was repealed in the early 1970s. Being a “femme”, I was berated and verbally abused, but never arrested.
Posted by sharecropper at 1:12 PM

Thank you for sharing. This is a sad story, but a brave one, too. We know so little about what is surely a normal variation in the way people are. The person who cuts my hair once asked me, with a snicker, "Have you seen the he-she at church?" I replied, "Yes, and I can't begin to imagine how much courage it took for her to become what she knew herself to be." The snickering stopped, and my haircutter quickly agreed that yes, it took great courage. I happen to know that the person in question was shunned by her Eastern Orthodox family when she decided she could no longer live as a man. She was married, and the father of two kids. Recently, our church newsletter reported the death of her father. I hope he was reconciled with his daughter by the time his life was over. Life is too short.