It's hot as blazes in the sun here in Atlanta...nice on the back porch.

The pup, Ruby, is wonderful. She and I had a nap this morning. I'm in love.

Stitches South was interesting. My first class was Making the Most of Self Striping Yarn, and I thoroughlyl enjoyed that. I learned about counting stitches on a swatch for certain colors and figuring out how they would fall in a pattern. Then we began a mitered square cap, which I will finish later. I love mitered squares...especially with short length self-striping yarn. Otherwise, they just look funny. 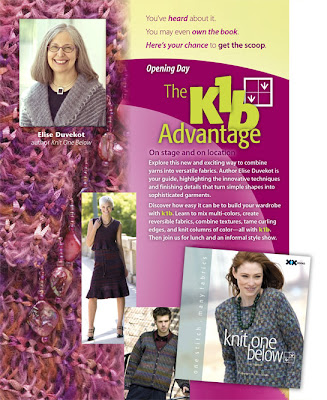 Elise, who taught the first workshop on Knitting one Below and presented a fashion show of pieces done with that technique, was a personable and thoroughly human woman with great ideas. The guy who was her model was also fun. She wanted to show us the backside of the sweater he was modeling and pulled it up in front - now mind you, the room is full of women of all ages. A delighted hum went around the room as his midriff showed. Elise turned almost purple and had him turn around to the back. As she pulled the back up, she realized that his underwear would show a bit at the top of his pants; so she quickly pulled the sweater back down, we all laughed - including the model. At the luncheon afterward, he again modeled the sweater and was laughing along with all these women. Such a good sport.

The Market opened at 5 pm and I was there - until 8 pm. I had done about one third of the show, when I decided to go eat. No eateries within walking distance except a sports bar and the hotel restaurant. I ate in the bar area. Since Atlanta has a no smoking rule, that was pleasant, but the noise and laughter got louder and louder.

Friday morning, I slept through most of my class; so I gave it up for lost and had a long shower. Then I went back to the market. I was somewhat disappointed with the Market - no really good sales, and I think nearly everyone was looking for wholesale prices at what is apparently a retail show. A few places had very good deals,and some places had yarns I had not seen before. I was going to buy some bison yarn, but it was $80 plus a skein. The muskox was similarly priced. Both were very soft, but the muskox fiber was fragile - not suitable for sox - most used in lace shawls and scarves and such. The bison was much more durable and soft and came in two different weights. The dealer was also selling bear hides, tanned and brushed to a magnificent softness.

I was hungry; so I purchased a soy/meat hamburger and coke and sat down. Across the aisle was a table with huge bundles of yarn piled shoulder high to me. I kept staring at the gorgeous colors. Finally, I went over to look - sock yarn - over a thousand yards of sock yarn in each bundle. So, I found a great color and bought it. Then I struggled back to my room with a bag of books and a bundle of yarn.

My friends arrived at the hotel and we went to eat - soooo good. Ted's Montana steak house - and Wow! What a steak! We'll be having that for supper tonight.
Posted by sharecropper at 5:44 PM

Speaking of self striping wool...