My friend Lindy, who up and moved all the way from Texas to Wuxi, China, and surprised us all, has pointed out that I haven't blogged in a while. No matter what I write, it would be boring in comparison to her wonderful pictures and commentary about life there. She played with a band one day - a group of women who were wonderfully dressed and wore dashing red hats. They let her play the drums and then the cymbals and put one of the hats on her and took her picture. Well, +Clumber photoshopped the red hat onto several profile pictures on FaceBook. Two of us got different colored hats, though. One was black, and mine is blue. 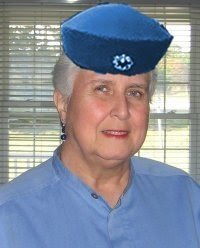 as you can see from the picture. I'm delighted to have the blue hat and have decided that I will be the flag waver since I don't "do" music well. 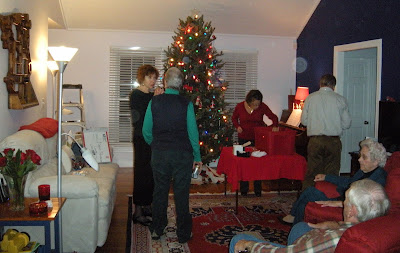 Speaking of that, I missed Lessons and Carols at church last week because I was getting ready for our annual Tree Trimming Party - our 10th. But, my first tree trimming party was in 1988. This year we had short pork ribs cooked in the oven slowly with Memphis dry rub (my version, very sweet), then slathered lightly with a more tart wet sauce and baked a bit more. Only four were left; so I guess everyone liked them. We also had some almost tasteless shrimp (a round frozen tray that I bought - won't do that again), my own spinach dip, Lisa's Tex-Mex 5 or 7 layer sort of dip, black bean hummus (again my creation with baked onion in it), sugared pecans, cupcakes from Miss Kitty's bakery, and all sorts of non-alcoholic drinks. That non-alcoholic is because some of us are allergic to alcohol. When we drink, we break out in handcuffs.

I've taken leave from my wonderful job at the yarn shop. No, I'm not sure how long, but not permanently. My mornings are not so good lately. I won't go into detail but simply say that fibromyalgia is worse some days than others, or some weeks. I've been reading about XMRV, a retro virus that is thought to "cause" chronic fatigue syndrome. Most of the symptoms fit me, although my partner disagrees slightly. I've thought of getting tested for the virus, which shows up in white blood cells, but no cure or real treatment is available. Giving a name to my pain and problems might help. And, XMRV might be more believable than fibromyalgia.

Here's my recipe for spinach dip:
1 or 2 boxes of frozen chopped spinach (I used 2 Green Giant - all I could find and they are small)
1 package Knorr's vegetable soup mix
1 16 oz carton of reduced fat sour cream
1 package 1/3 less fat cream cheese
1 cup of pecans
1/2 package of dry Ranch Dressing mix
Garlic Salt (about 1 teaspoon for me)
Cayenne Pepper (1/4 teaspoon for me)

Thaw and squeeze the water out of the spinach.
In food processor (mine is more than 20 years old) chop cream cheese into pieces, add pecans and sour cream. Blitz for a bit. Then add the rest of the ingredients. Blitz some more until the texture is grainy but not chunky. Place in refrigerator for some time to let the tastes mix well. Use finger to clean the food processor bowl, place finger in mouth and close lips around finger. Remove clean finger and savor the great taste. Don't chew the finger; that hurts.
Posted by sharecropper at 7:56 AM

The food was excellent especially the ribs. Best I've ever had. A good time was had by all! Thanks to both Margaret and Lisa.

Ribs sound interesting. Happy to see another blog entry. One of these days I'll get back. Hugs.

Oh, that food is making me wish for an Adventure in YOUR Kingdom. You know I'm a chile'a th South, and I loves me some lip-smackin' ribs. And the rest... Oh, Sharecropper, you shouldn't put me in such agony.

Spent the whole day in an unheated classroom administering one-on-one tests to students who mainly just sat there and stared at me dully. Good to be home and warming up.

Thanks for your kind words about my blog. In a way, you are all here with me.

Anonymous said...
This comment has been removed by a blog administrator.
2:28 PM