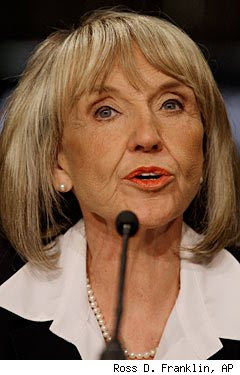 Arizona's Republican governor signed SB 1070 into law. The bill "will make it a state crime not to carry proof of legal immigration status". Not only do you have to carry proof of being a US citizen or legal immigrant in your pocket at all times, you have to produce this proof at the request of any police officer. Mind you, the governor has insisted that racial profiling will not occur.

Excuse me. I can't imagine that a tall, redhead would be stopped for suspicion of immigration violations. But, in Arizona, I wonder how many US citizens of Mexican descent will be stopped.

I realize the following example is far-fetched, but imagine a group of kids playing basketball at the neighborhood church. The police arrive. Not a single kid has an id of any kind. The police call a van, and all the children are carted off to the police station.

What an opportunity for the athletic clothing producers! Now, marketed only in Arizona, special shoes where you can fit your "green card" or birth certificate and picture id. I know they already make special pockets and pouches and bags and armbands for carrying id, keys and such. But, in Arizona would such an armband convey legality to a police officer or just increase suspicion?

If I walk to the market three doors away with nothing but my house key and money, will I be stopped as a possible illegal immigrant? What if I'm wearing my old jeans and t-shirt with a floppy straw hat or a baseball cap. In the summer, my visible skin becomes dark. Will walking briskly make a difference? And, what if I greet my friends in Spanish? (Hablo Espanol un poquito.)

News reporters have presumed that this law will be ruled unconstitutional by the Supreme Court - when it finally arrives there. How many people will have been wrongfully detained by then? I find it hard to believe people who write and pass and sign these bills into law can't see how unfair such a law would be. Why a member of the Legislative or Executive branch of the government might even be stopped! Wouldn't that be sad.
Posted by sharecropper at 8:07 PM

But we don't live there and we don't have desperate people making a mess of our lives. I pray this will force Congress to deal with the issue finally tho I have no good suggestions that would be acceptable.