A year and some later

It's been more than a year since my last blog. Father, forgive me. I have spent that time isolated from the real world, tucked away in a utopian retirement community where all the houses are essentially the same, most of the people are super conservative politically and Roman Catholic or conservative literalist Christians. And, they are mostly white. The black couple several houses down moved away. The gay couple is selling their house.

Some days I just feel like vomiting. And, other days I enjoy looking at the fancy golf carts, colorful hats, bright flowers and sunshine. Yes, God, you have blessed central Florida with sunshine, and I am grateful. I am also mightily grateful for air conditioning and a well-insulated home. The humidity is relatively low here; we have rolling hills and horse farms; we have little towns; and we have lots of thrift stores. My favorite thrift store is moving, and I have several tubs of stuff to take them when they have finished moving.

The black people I see are glimpsed sitting on crates and smoking around the back doors of restaurants. The Hispanic people are either well-to-do and live in the retirement community or tucked away in rental trailers in isolated mobile home parks. We saw a man riding a beautiful horse this week; we stopped and talked with him. He was Hispanic; I'm told he was from Argentina. I'm also told there are Cubans about, but I don't see them. 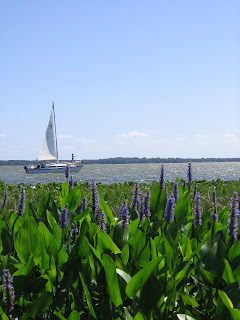 So what's it like to live in la-la land? I don't get out much except to eat out. I knit, crochet, read, sit and go to the doctor. We ride out to local lakes sometimes so that I can see water - and touch water - living water. I pet the cat. I take my medicine; I feel better and I've lost 25 lbs. in this past year. But, I may need a knee replacement sometime soon. Second opinion coming up a week from today. So, I don't walk much and I don't do any weight bearing exercise. My body is wearing out before I'm ready for it to do that.

People play golf here - I'm not sure that anyone knows how many golf courses are in the 25 mile radius of us. Too many. They are mostly brown now - greens and tee boxes are green - not enough rain. But everyone's yard is watered once or twice a week (depending on which county you live in and if you know how to adjust your automatic system). Succulents grow well, but petunias are like cut flowers at my house - dying almost as quickly as I buy them.

There are so many clubs for so many reasons that I can't begin to comprehend them all - Indiana Club (and clubs from most other Northern states), Cloggers, Ukelele, Line Dancing, and a heaping handful of knitting/crochet/quilting clubs, art clubs, photography, computer, iPad/iPod, all kinds of singing groups, theatre groups, stamp collectors, snowbirds, orchid - the list is endless. And, many of them have fundraisers for charitable organizations - both national and local. And, there are volunteers, but apparently not enough since every week a new list of organizations seeking volunteers is published.

Did I mention that you can get to 62 different restaurants in your golf cart? My goal for the year is to eat lunch in every "country club" restaurant in the community. I will have to do that more than once a week to make my goal.

I have a few facebook friends locally, and they are mostly raving conservatives who post awful things about the President. I'm not sure they know that gays exist, but I don't see hate posts from them on that topic. They seem convinced that all the country's problems are because we elected a non-American, Constitution-hating,  hypocrite who doesn't pay his secretary enough, and has a wife who wears outrageous clothing. No comments about his daughters so far. I refrain from commenting because I just get put-downs when I do. I just delete. But, I do post items that reflect my own thinking; no one comments on them.

The neighbors trimmed their big palm tree last week, and I drove right past my house looking for the big palm tree that I use as a landmark. Now, my landmark is the bright red fire hydrant across the street.

I went to a knitting/crochet club one day for a few hours. People sat in cliques, and I joined one of them, but they talked about their common home town. I haven't been back. I did manage to snag a few skeins of yarn from 7-8 boxes that someone donated from a recently deceased person.

The local paper publishes stories about people in the community along with columns from other retirement communities in the area. It's just too good to be true. Life is one big round of golf, concerts, clubs and eating out. The Barbershop Chorus has members from other area towns and communities; so you don't hear much about their winning third place in the statewide contest or that they sell singing valentines to raise money each year. Bocce and pickleball are big here. And, a bottom banner in the newspaper tells you what pool Heidi Johnson of Chatham Village likes best. 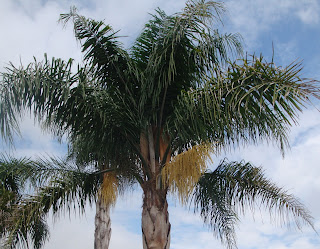 We have family pools, community pools, and some other kind of pool - all designated such by who can swim in them. Your ID card is required when you enter a recreation center and every "village" has one. And, a gate key is necessary to enter, unless you just push the button and get your picture taken. A few gates have attendants whose chief duty seems to be to greet each resident and raise the gate arm for those of us who can't get close enough to the card reader to make the gate open. I think they also record service people who come to work on something for those of us who live here.

Yet, I am content. I am loved and cared for. I have everything I need. I am comfortable. I wonder how long I can stand this.
Posted by sharecropper at 6:29 PM

I have thought of you often. Hang in there.