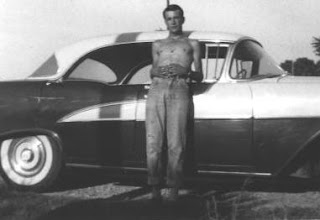 One day a few years ago in therapy I talked about loss, abandonment. My therapist asked when I realized that my Dad was gone and wasn’t coming back except for annual leave timefrom the Navy. I thought for a while, but I realized that I don’t remember missing him. I talked about what I did remember. “Daddy, pickie-toe” (how my Dad would take his big fingers and run them between my little toes, one by one, to remove the dust bunnies from my socks) and how I still do that every night. Such a powerful feeling of being taken care of. And, I cried.

I wonder if that’s what it’s like to call God Father. Does the word father convey such strength and security to most people? Is that what fathers are like? I have only two memories of my father when he wasn’t drunk. One is the nightly event, “pickie-toe”, and the other is of his teaching me how to shoot a gun for the first time.

Yet, if I could call to God, “Daddy, pickie-toe”, I wonder how I would feel. God is something ethereal to me most of the time. Present but not real, not tangible. Only when I feel God’s tangible presence am I truly moved in my ministry. I can see God in the persons with whom I work and interact, but I don’t have “ideal” images of God - only bits and pieces gleaned from the faces and beings of humans, tidbits that hint at something greater.

And, could I call Jesus brother? I felt that my brother who loved me so much and taught me so much deserted me and died when I needed him most. I understand why the disciples felt so abandoned. Why didn’t Jesus speak up to the authorities? Why didn’t he save himself? Where is the salvation in a brother who abandons you and the cause just when he’s needed most?

And, the Bible says that Jesus died to save me - substitutionary sacrifice/punishment. That doesn’t ring true. And, the parallel with my brother ends there. He did not die to save me; he did not intend to die. I wonder if Jesus intended to die. Maybe he didn’t. Maybe he just knew that nothing he said would change the inevitable. Eventually, the “church powers” would feel so threatened by his interpretation of God that they would have to get rid of him in order to maintain power.

And, Jesus rose from the dead. I have often felt my brother’s presence with me - less as I grow older and further away from his living days. Maybe that’s why we continue to tell the story; so that we won’t lose the presence. And, maybe the story-telling helps us continue to find God’s presence. The prescriptions for living are well and good, but they don’t have the power to move us that stories have.
Written in June 2003, Revised March 2007
Posted by sharecropper at 4:35 PM

I wonder if that’s what it’s like to call God Father. Does the word father convey such strength and security to most people?

If that's what it takes, then I'll never know God the Father. But I do, or I think I do, a little, and he's a nurturing father. But my idea of God the Father is not related to my real-life earthly father. Long story there.

I never had a brother. I sometimes have feelings of abandonment by my two sisters who have died.