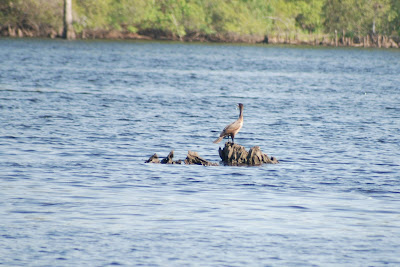 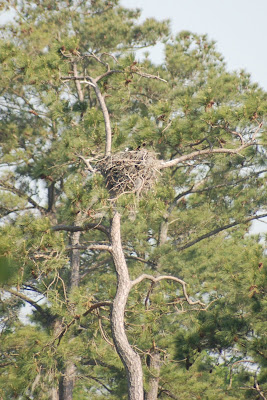 Living on a creek in North Carolina offers some amazing views of wildlife - mostly birds and lizards. Today has been no exception. This cormorant (possibly close cousin to a cormorant, I don't know) sat on the stump at the end of the promontory across from out house...for hours. Finally I found the camera with the telephoto lens and took its picture. It was looking away from me because two jet skis were approaching. He only moved his head to watch them pass.

Then, I saw the osprey's head peeking over the top of the nest; so I tried another shot. Maybe you can see that dot of white; the nest has gotten deeper since last year. I don't know if she has eggs or not, but she's certainly alert to anything going on in the creek.

Walking back to the house I met a six or seven in lime green lizard - so brightly colored that I was startled. For two years, I've had a buddy chameleon, but he was not so large. He would appear at eye level when I was walking through the gate, and I would stop to talk with him. He must have liked me because he'd put out his orange under-neck and stay as long as I talked to him. I saw him every day that I was outside. This bright darling was shy and hid in the latticework so that all I could see was the tip of his tail. As I talked to it, the head gradually appeared, then drew back. Perhaps I shall I have a friend this year as well. This one did not stay still long enough for a photo - especially not with the telephoto lens.
Posted by sharecropper at 7:48 PM

Yesterday I passed an old silo that had odd bumps on top. As I passed I saw there were a half dozen buzzards sunning themselves. Unfortunately there was too much traffic to pull over and get a photo.

That cormorant might actually be its close cousin, the anhinga. They're way cool to watch when they're sitting with wings outstretch, drying.

I'm going to start taking my camera with me. Yesterday I saw a meadowlark on the way home. And a red-winged blackbird was on the feeder ... odd, since we're in a fair amount of woods. I also see brown thrashers, but they're really shy.