Demythologize -to reveal and understand the true character, nature, or meaning of something by ridding it of all mythical or mysterious aspects (Encarta Dictionary North America)

I remembered those two years in Bermuda as being idyllic and the rest of life as being horrible. And, that is not the true character of either. Indeed, Bermuda was the scene of much growth in my life, some of which would have occurred wherever I was when puberty hit and some of which could have happened nowhere else. Each person is shaped not only by the people and circumstances but also by place. I would have grown up anyway; being in Bermuda changed what that growing up was like. 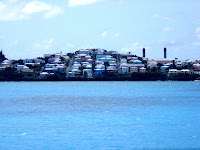 The island is tiny; the roads are narrow; cars are much wider now than in 1957-59; driving is dangerous. Somerset, my end of the island, has deteriorated as the cruise ships have gotten larger and can only dock in Hamilton and, if the wind is right, at the Dockyard and at St. George’s. The wind was not right while we were there; so we did not get to see St. George’s. 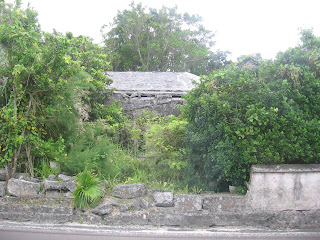 However, our tour driver recognized the location of each picture I had brought from my previous years. He took me to each of them and let me take new photos. He showed me my school and how it had changed (good upgrade). He showed me where I had danced with the gombey dancers in a low income area (now a very fancy resort). He showed me the house where we had lived (see picture). And, he took us to lots of bays and places where I had ridden my bicycle (I didn’t see a single non-motorized bike). I even took a picture of my best friend’s house (now with a wall and tall oleander bushes). In three short hours after landing in Bermuda I had seen every place I really wanted to see.

The rain began that night and continued until late the next afternoon. Lisa took off in the rain the following morning to swim with the dolphins – a dream experience that we had missed on our trip to Central America. She got to tickle the dolphin’s nose, and her delight was evident in the pictures. 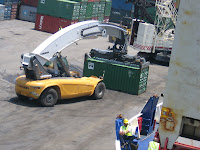 The following day we were set to transfer to St. George’s, but high winds prevented that. We were moved backward to an industrial dock and had to use tenders to transport all of the 1500 passengers who wanted to go ashore on this very beautiful day. We finally got ashore at 1:30 pm. We visited Marks and Spencer and a music store. We were on our way to a thrift shop that might have had the vinyl records that her son Jon requested when we discovered that it was not open on that day.

We also discovered that a large (and this was the smallest of the line) cruise ship was not a great vacation for us. The largest ship we had been on previously held 125 passengers and activities focused on the area in which we were traveling.

We had a nice suite with its own balcony/deck. I slept in a lounge chair on the deck for much of the first night at sea and fell in love with the ocean all over again. The casino, the bars, the nightclub, the bridge tables did not appeal to us. And, so many people were everywhere on board, but becoming acquainted with them was difficult. We did have a very good dinner table crowd, and the food was good – well presented.

So, the trip was good, but we won’t go back to Bermuda, and we probably won’t sail on a large ship again. I’m hoping for a polar bear trip next time or maybe a South American adventure, but I think I’ll avoid the tourist spots.
Posted by sharecropper at 9:30 PM

I've been waiting to hear you arrived home safely and whether you were able to see much of what you knew before. I love the definition you found for "demythologize" that points to the "true character" rather than, what sometimes can be a meaningless stripping away or emptying of all but the shell of meaning.

It must have been tough, but I hope worthwhile and necessary to see the hard dirt (or whatever is left) that was the foundation for the world you knew there. Although the circumstances were quite different, it reminds me a little of the trip the B., my former boss, planned to the Ukraine to visit the site of the village where his Jewish family lived before they left following the Russian Revolution and the subsequent destruction of the remaining Jewish community there. Despite all the pain associated with the place, B. remembered that his father, who escaped and walked across Europe as a teenager, talked about the home of his childhood with much affection and delight throughout his life. B. and I had to travel around to various counties to visit clients and make court appearances, so I spent a fair amount of the time in the car with him listening to him debating with himself about whether he really should try to get a taxi out to the village site, knowing that there would probably be nothing left that he could associate with his father's childhood memories. Yet, he felt he had to go.

I imagine it was more so with you since it was your own childhood idyll. I hope you are, on balance, happy that you went. How wonderful to have such a place in memory, at least, even with its true character pared down to the core of what you've kept inside you ever after.

Welcome home, Share Cropper, from what sounds like a rich journey. Or, welcome to the continuation of the journey. Thank you for the photos, and the wisdom, as always.

Share Cropper, welcome back. I will write more later.

Well, you saw Bermuda again, but it was not the same Bermuda. It was something that you had to do, I believe. Now it's out of your system.

My husband and I have been on many cruises, some of them really wonderful, especially the Alaska cruise and the cruise to the southern Caribbean.

We did a Canada/New England fall foliage tour last year, but I was sick five out of the ten days, two days completely cabin bound. I feel that I never want to go on a cruise again. We shall see.

Yours was more than a cruise; it was a trip into the past. It seems that you found that the past is truly gone and the ghosts are laid to rest, which may be a good thing.

I'm glad Lisa got to swim with the dolphins.