The listserv for the House of Bishops/Deputies had many posts today and last night following the statement from the House of Bishops meeting in New Orleans. I have been slogging through them as well as reading some headlines from newspapers in other cities and countries. No one can agree on exactly what the statement means. Clarity is not in the discussions. That decisions will be made for the Episcopal Church by General Convention 2009 is the only consensus that seems to be forthcoming - and even then some disagree.

Slogging is not something at which I am good. I like to leap tall buildings and stop speeding bullets. Over the years, I have learned that, if I have to slog, the resultant knowledge is generally not worth the effort I have put into it. So, I don't do much slogging now.

And, that's a lie. I am slogging through recovery from the very serious respiratory condition that I have had for some time. I've hit a plateau brought on by stress of moving, renovation of the house, my godson-in-law's death, changing doctors, losing weight (down to 183.5 today - Since May 17th, I've lost 13.8 pounds with Weight Watchers. My buddies have lost much more, but I'm slogging along with this also.

Today I met a new psychiatrist to prescribe medicine for my depression and anxiety - been taking meds for this for some years now - thanks be to God. But, she suggested a change - rather an addition - that makes 12 prescription medications I'm taking now. Bleah. I don't want to admit that I need more help than I have with my present medicine. I don't want to admit that I have bad reactions to just increasing the dosage of my present medicine. I don't want to admit that I can't control this episodic depression myself. I'm like a diabetic in denial. So, I took the blasted pill tonight after I checked it out on the internet. I'm not happy about it. I hear my Mom saying that I could make myself run a temperature if I were bored with school. And, I hear her saying that I have everything a person could want, and she doesn't understand why I'm not happy.

Well, I am happy. I am happier than I've ever been in my life. But, that doesn't have anything to do with my anxiety and depression. The episodic depression hits for short periods - 2 hours, 8 hours, 2 days, and then it's gone. Retail therapy helps; talk therapy helps; group meetings help, but sometimes, I just isolate and sit there staring at the computer screen solitaire game or out the window at all for which I should be thankful - feeling inert - dead to emotion. I can still make my gratitude list; I can still pray even if I feel it goes no further than the ceiling or the walls. I can even laugh or cry or hug or be angry - but the feelings are fleeting and don't go very deep.

Okay, now I'm off the pity pot. I like the psychiatrist. I'm not as tired as I expected to be. I'm glad to have a bed, a partner, and two crazy cats (or is that redundant?). 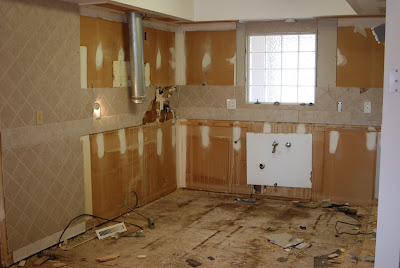 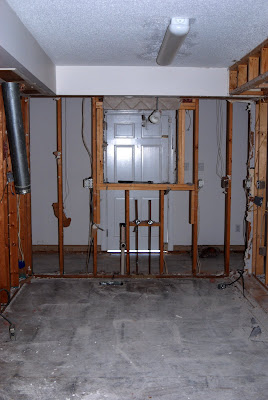 Here are a couple of pictures of how the destruction before the renovation is going. Also discovered a large wet spot in my bedroom where the toilet is apparently leaking - don't know the extent of that damage yet - but we wouldn't have found it if we hadn't done this renovation. And, I got to slog a few blows with the sledge hammer today myself - so that felt great!

Gone
Posted by sharecropper at 9:31 PM

From Jan Nunley:
...and behold, how many competing interpretations can be made of one document that is only one day old and written in the contemporary language of those reporting on it, with the authors nearby for clarification! Now do you see why the interpretation of a set of 66 books in several different languages at several thousand years' remove is such a challenge for mere human beings?

Meanwhile, your remodeling is on track while mine is on hold with deadlines looming and a builder too busy to deal with the township which must approve the plans before anything can be done. ha. My house is not visible from the road and my neighbor is doing the site prep. But I'd still prefer to do it all correctly.

I like everything Jan Nunley writes. And I think she's easy on the eyes too.

Hey, Sharecropper, swing that sledge hammer a few times for me. That sounds good. Swing it wide and steady, and follow through like you're driving the green. I feel better already.

I am glad I don't get the HOBD list anymore. So little of value, so much stupidity.

I am glad that you are on some good meds and that your doc seems to be on the ball. I wish we could get the bishops to take something...

We're a pair, ain't we? I remember what Dad & I used to chant as we walked the railroad tracks:

I bet the condo is going to look FABULOUS, darling.

Totally off topic but you expressed some interest in this:

CBC Shop: Little Mosque on the Prairie is finally for sale. It has the episodes I didn't send you and some other shots.

Depression: been there. I understand.

Don't listen to your mom's voice in your head.

I posted a sermon yesterday, that might be of help to you. I gave it in the context of a healing Eucharist, at school. Take what is useful; leave whatever isn't.

My books came two days ago; been needing to thank you. There's some good stuff in there.

Hang in there, Sharecropper. Love and prayers winging your way from California....