A good reporter always asks five questions (at least that's what I was taught in 1963): Who? What? When? Where? and Why? The first four are often easy to ascertain, but that fifth questions leads us into places that are unsafe - physically, mentally, emotionally, psychically. Often the places that Why? leads us are untrod ground.

Growing up on the farm, we called it new ground. First the trees would be cut, and the timber used in appropriate ways. Then the brush would be rooted up and piled into huge piles that were burned (remember this was in the 1940s and 1950s). Some of it was undoubtedly saved for kindling because we used a wood burning stove for heat in the winter. Stumps were included in this burning. Rocks were pushed and lugged out of the field. Only then could the tractor with it big turning plow get in there and make deep furrows in the land. The soil that turned up from below was black and wet. But, when it dried, it was as hard a brick...gumbo, it was called. The fields were turned and disked and harrowed. Then the rains came, and the ground was like black glue; it stuck to anything that touched it. When it dried, it cracked open in geometric shapes. Beautiful to a seven year old, but dreadful to our father farmers. 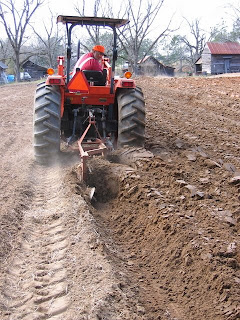 Except near the bayou, the soil would be turned, disked, and harrowed until it was black sandy loam - the stuff that farmers hold in their dreams. New ground. Lots of work went into creating new ground.

Lots of work often goes into answering Why? - the new ground of our minds...and lots of time. The answer doesn't always come. I will die never knowing why I like red so much or why I seem to need more...more of everything. Each time I answer a Why? question about myself, I change the answers to the other four questions. Who am I? Where am I? What am I? Yes, I realize that's only three of the questions: When? Time is so elusive for me. I understand God's time a little better as I remember the past and as I look to the future. I live in the present (most of the time), but When?

When am I in my life? Am I really a senior citizen? How do you measure years? Do miles count in that measurement? Does creativity count? How about love? When am I in the course of loving people? Near the beginning - the middle - the end or somewhere that I don't even really know? What I do know is that my computer (attuned to the atomic clock somewhere in the world) says that it is 8:13 pm on May 21, 2008.

My question then is So What? or Why does that matter?
Posted by sharecropper at 7:59 PM

I like hearing you talk about preparation of new ground. As a West Texas farm girl I should know something about that. You also have to remove vegetation that has particularly deep roots and will sap water streams, especially important in the desert. It's backbreaking and deep work,eh?

I guess time is convenient but I don't really believe in it. That illusion has been obliterated.

Glad you are posting again!