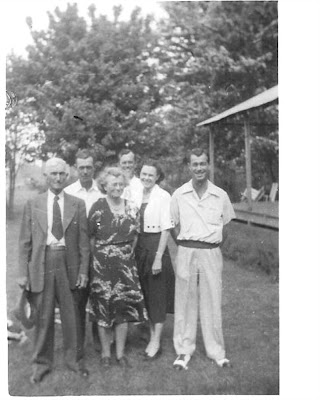 Uncle Myrvis on far right, my Dad behind Papa back left.


My uncle, closest living blood relative, died last night at age 88. His funeral is Wednesday. His first cousin who has taken care of his money and lives near his assisted living place called me at lunch today. I suppose I could bag a quick flight from here to Memphis and rent a car and make it to the church in Mississippi by 10 am on Wednesday, but it's not happening. Cost would be exorbitant, heat would kill me. However, I resent not being given the choice of attending his funeral and burial. He will be buried next to my father in French Camp, Mississippi. I wasn't given much choice at his funeral either. My aunt made the choices and then told me.

Yet, my loyalties lie elsewhere. My boss had several family deaths last night - you probably read about it on the news - man kills wife and two children then himself. He tried to kill the 13 year old son who escaped. Boss' nephew. She is flying out today, and rightly so, to comfort her sibling. The three of us who work at the yarn shop are holding down the "fort" until she can return. Please keep that family in your prayers.

I keep asking, "Why, God, are people so cruel to one another?" Still it happens, another castoff, another insane event, so much hurt and pain.

My uncle was a purple heart POW from WW2, shot down over Germany, lost his leg, didn't know anything about PTSD and sentenced (in effect) to a life of alcohol on a small farm in Mississippi. Most of his life he slept on a single bed in a room barely wide enough for him to stand beside the bed. No plumbing. Living with his parents. Not coping with anything. Then he went to work for the post office and delivered mail for many years on the rural route where we had lived. Finally, he became unable to care for himself and went to a Veteran's Home where he was seriously unhappy. Cousin had promised she would care for him if needed; so she took over his finances and moved him into an assisted living place a block from her home.

That was at least five years ago, and I'm know that she and her family cared for him faithfully. At the same time, cousin fought for custody of her grandson and won and raised a fine young man. I'm sure she wants this over quietly, quickly and in proper manner.

May God grant all of us peace, humility, comfort and grace. Amen.
Posted by sharecropper at 3:06 PM

Where did the violent deaths happen?

I am sorry that your uncle had to suffer from PTSD after the war. Years ago, I guess they would have called it shell shock. But now, this illness has a name and an address, and services are still dened to too many in our military who suffer from this debilitation.

Sorry that so much death has been visited on you and yours recently.

So sorry to hear of so many deaths at once near you.

I was raised in a very large, close, extended family. As an adult, the family is no longer close and does not always take into consideration those who live away when a death or other family event occurs. Once an uncle was transferred to the town I live in for rehab. I was not told of his being here until he "coded." (this was 3 months after the death of my father from cancer whom I had cared for for a year while working full time) Then there was a call at 2 a.m. for me to go to the hospital and be with him until family could get here (2 hours or so). I went. The uncle was not conscious. I stayed. The family came and I stayed with them. Much later in the day, the decision was made to discontinue life support. The uncle died. I helped the family make calls, etc. and gather up the uncles belongings. They left with never a thank you or even a good bye.

My heart was broken. I don't know why families do things like this but I do know that that it hurts like hell. I will be thinking of you and keeping you in my prayers.

I've been out of circulation lately, and I am so sorry for your losses. Death is always with us, but it always comes as a shock, and sometimes it affects how we react. I send you the gift of Peace, the peace of God.

Holding you, and your boss' family, in the light
Tricia