Being Lesbian in a Straight World 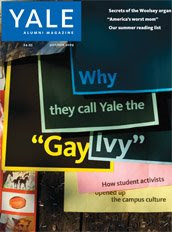 In the July/August 2009 issue of Yale Alumni Magazine, Mitchell Reich said, "My epiphany (coming out as gay) was always supposed to expand my world, never to limit it, and I'm disappointed in the contraction of my social panorama." (p47) His coming out was about 4 years ago, not nearly long enough to have accustomed himself to living gay in a very diverse world - not just straight (heterosexual) but also one that includes people who want to kill you for who you are. Terrorists want to kill us because we are American. Some Muslims want to kills us because we are sinners. Mothers and fathers fear us because we are not what they want their children to become...or for other reasons. Churches ban us because they interpret scripture differently than we do.

So we do cocoon (to use Mitch's word). We tend to gather in groups of people who are very like us, people who look askance at heterosexuals in their midst. At least that's what we do in the beginning of our "coming out". Some of us never make it past that acclimatization. I retreated into heterosexual marriage after those first four years. Of course, the world was very different then. Police could arrest you for being in a gay bar - the dreaded vice squad. Landlords could refuse to rent to you, and employers could fire you.

However, after living in a world that included lots of straights and gays for many years while I was married, I can return to being openly lesbian without the cocooning. In fact, I would miss my hetero/married friends and their children. I cannot let being lesbian dominate my life - how boring! Nor can I deny my marital status - civil unioned in a far-off state, holy unioned in a conservative town, but openly partnered with a woman.

We are part of a group that is striving for acceptance within a church - a small piece of giving back for the comfort that we feel and the financial ability to say, "I'm not sure what you think of me matters very much." Our parents are dead; her son lives a rather bohemian lifestyle in a large city. We don't have consider the consequences for our families.

But most people around here really like us: the older ladies where we go to church, the men who work on our home and our yard, the people we meet where I work, church people that we come to know, twelve-step people, and other groups who might be more traditionally unwelcoming. We've met very little bias, anger, fear or repression. We are truly blessed.

Our parties include some gays but many others - singles, heterosexual marrieds, partners of various kinds, children. I would miss the richness of this blend of people. We even have conversations - some in person, some on the internet - with those who think that our sexuality choice is an abomination. One of my dearest "children" from a time when I worked at a college has very different opinions about what the Bible says about our lifestyle - and some other things also. We occasionally talk about that, but mostly I want to hear about her children, her move, her running accomplishments, what kind of French meal she is preparing for celebration of the Tour de France. I follow her notes closely on Facebook.

Yes, Mitch, I understand your cocooning during the first four years after coming out, but now you have to come out again. In order to expand, you need friends from all sorts of lives and all ages. If you continue to cocoon, you will not be "becoming more fundamentally honest, learning to share myself more deeply with other people." You will become what you were called when you first ventured away from the cocoon: a faggot. You must not let being gay become constitutive of your identity to the exclusion of other parts of you.

I offer you my blessings and my prayers for the man you wish to be. May others find that same diversity within themselves.
Posted by sharecropper at 10:04 AM