One man was allowed to sit up in his bed for an hour each afternoon to help drain the fluid from his lungs. His bed was next to the room's only window.

The other man had to spend all his time flat on his back.

The men talked for hours on end. They spoke of their wives and families, their homes, their jobs, their involvement in the military service, where they had been on vacation..

Every afternoon, when the man in the bed by the window could sit up, he would pass the time by describing to his roommate all the things he could see outside the window.

The man in the other bed began to live for those one hour periods where his world would be broadened and enlivened by all the activity and color of the world outside.

The window overlooked a park with a lovely lake. Ducks and swans played on the water while children sailed their model boats. Young lovers walked arm in arm amidst flowers of every color and a fine view of the city skyline could be seen in the distance.

As the man by the window described all this in exquisite details, the man on the other side of the room would close his eyes and imagine this picturesque scene.

One warm afternoon, the man by the window described a parade passing by. Although the other man could not hear the band - he could see it in his mind's eye as the gentleman by the window portrayed it with descriptive words.

Days, weeks and months passed. One morning, the day nurse arrived to bring water for their baths only to find the lifeless body of the man by the window, who had died peacefully in his sleep. She was saddened and called the hospital attendants to take the body away.

As soon as it seemed appropriate, the other man asked if he could be moved next to the window. The nurse was happy to make the switch, and after making sure he was comfortable, she left him alone.

Slowly, painfully, he propped himself up on one elbow to take his first look at the real world outside. He strained to slowly turn to look out the window beside the bed.

It faced a blank wall.

The man asked the nurse what could have compelled his deceased roommate who had described such wonderful things outside this window.

The nurse responded that the man was blind and could not even see the wall. She said, "Perhaps he just wanted to encourage you."


This story makes me wonder what "seeing" has to do with perspective/attitude and happiness. Perhaps that's why gratitude lists are so important. Gratitude lists are enumerations of the things we can "see" in our lives that are good. What if we made gratitude lists for the things we can only imagine? When I am depressed and hurting, what if I made a detailed list of a trip that I want to take but have not taken yet? What if I described in detail the people I would meet and the sights I would see? 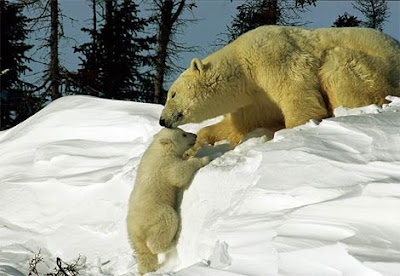 In such a gratitude list, I could even include the impossible events as well - hugging a clean polar bear, rolling around in the snow with a cub in safety. I could describe how the snow feels in that part of the world - slightly dry and raising puffs of white as we tumbled along and I butted heads with the cub. Rubbing my head with snow covered gloves and having the cub imitate my action. I could imagine my eyes tearing and the tears freezing as they stuck to my face. As I turn to leave, the mama bear gathers the cubs near her and they watch as I get on the tundra buggy, staying still in that position until we are out of sight so that my final image is of "my" polar bear family.

In other lists, I could describe the serenity of places I have been and people I have known - things for which I am truly grateful - not just single words or phrases on paper but recalling the joys of being present to beauty, to love and to goodness.

I'm good with descriptions, but the plot would simply be gratitude that I was there or that I am there in spirit.

I missed the Independence Day fireworks again for the umpteenth year, but no fireworks could be as beautiful as those I see in my mind. I close my eyes and the swirling sprinkles of minute light bursts imprint themselves on my mind. The colors are varied, ranging from multi-hued magentas to bright yellows and mind boggling blues against a dark blue sky. And, the greens that umbrella over the crowd. The one red sparkler shot that seems to fall directly over me, and I can feel the bits of ash that haven't blown away above the trees as they fall to the ground around my feet, evidence of the specialness that I am. The red one was for me.

Our creek is wide where we live, but miles up, the branches overhang the shallow water. A deer drinks quietly from the bank as I round the corner (actually happened) on my propelled watercraft. I quieten the motor and drift for a few minutes. Today I'm dressed in the colors of the creek - a bit of green, dark pants that match my craft and the water, even a few sparkles to reflect light as the water does. The great blue heron continues to stalk a fish as I watch and moves into the edges of the cypress knees as I pass. White lilies that I've seen at a distance brush the edges of my craft as I ease by. And, there - just a few yards away on the bank - the white alligator that people claim to have seen. I am frightened, but I take a deep breath and gently turn around - moving the water so little as not to be noticed. The alligator is very large and the sun is warm on its back as it appears to doze in the afternoon. Easily, easily, I move back down the creek toward home. The alligator continues to doze. Nearer home, the turtles still slide off the fallen trees into the water as I approach. And, then, home appears around the curve of the creek. A boat slows and waves as I approach my docking spot.

I can encourage myself with descriptive sightings - those of the outside world, those of my inner world of peace and delight, those of memory and those of hope.

God, let my fingers do the talking when I am sad or hurting.
Posted by sharecropper at 6:10 AM

You should write more. Your fantasies are wonderful.

Mine always involve people I know and are usually an escape from the frustration of a relationship with someone. That person is never involved for obvious reasons. The "object" of my fantasy adventures changed last week so I'm beginning new adventures. And, no, I will not write about them. They aren't lewd enough to be interesting. lol.

That is pretty good Spam.

Actually, makes my heart hurt. What a bittersweet tale.