Memories of rabbits and spider lilies 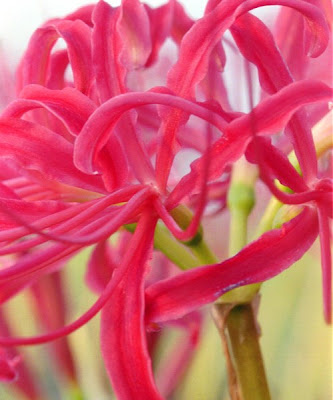 Good memories tint the bad ones with light and remind me of the hymn, "I Want to Walk as a Child of the Light".

This morning on the way to therapy, I saw red spider lilies blooming in a yard - just springing from the ground amongst the newly mown grass. No leaves - they come later - stems with beautiful delicate blossoms. We had spider lilies in our yard when I was a child. I would find the blossom heads among the grass and put sticks up to guard them from the lawn mower. Some years I failed and they never bloomed; the leaves came up later. But, mostly I remember sticking my face down in the mass of blooms and getting pollen on my nose and cheeks. 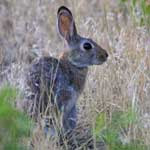 And just yesterday my partner was talking about a doghouse she had made and a friend commented about his rabbit house when he was younger. I suddenly remembered that I had rabbits when I was a child. (note: this is not my rabbit and the image came from this site) The cage sat beside the "old house", a falling in place behind our house. It was a wire cage on legs with pieces of wood covering the top to protect them from the weather. Grandma Woods, a neighbor, gave them to me. She raised rabbits of all kinds. I had one whose fur was blue, and I suspect he was a very special rabbit. They were bittersweet pets because I could not take them out of the cage. We had dogs and cats that ran amok in the yard. I could occasionally, by standing on a bucket, take the boards off the top and open the little door in the wire and pet them. They were afraid of me as they were afraid of most things. I commented that I had to give them back to Grandma Woods when we left for Bermuda (Dad was in the Navy and consented for us to join him there). However, I somehow remember that they left before that; when summer was over and we had to buy rabbit food, I doubt that we did. We didn't have enough for ourselves. The cat and dog (one of each by then) ate scraps and whatever they could forage for themselves. I suspect my grandparents fed them some.

My therapist says maybe I should replace the bad memories with good ones, but that's hard to do when each memory triggers both the good and the bad. It's like fantasy stories where light and dark fight one another; but real is that both light and dark are One. Good and bad are One. And, I'm not sure what that One is, but I trust it more than separating the two.
Posted by sharecropper at 3:37 PM