Telling my story in my blog is easier than telling it over the phone to my best friend. So here goes - for her sake and the sake of some good mini-stories.

Near the end of my sophomore year in high school (1961), my drunken Dad began to get violent. He grabbed Mom by the wrists and shook her. Sister in law Sue and I got on either side of him with iron skillet and butcher knife and threatened to kill him unless he quit. We moved the following week. I took final exams two weeks early, and Mom found a dump truck driver who would move us into my grandmother's empty house (she had recently remarried). Mom, Sue and baby Marty drove there in our 1949 Ford and I rode with the trucker to show him where to go. As soon as Mom got out of site and we got on the highway, he pulled over and said he had cancer and the drugs he was taking made him so sleepy he couldn't drive. Could I drive? I was 15 years old, but I'd been driving since I was 12; so that wasn't really a problem. Between tractors and the old flatbed truck we had, I figured out the system quite well. He went to sleep in the passenger seat, and I drove the two hours. We switched drivers just before we got there. He needed the money badly, and I was hooked on driving anyway.

We had no money, no job, little food, and were living in a town of 150 people- so no jobs either. I went to work as a waitress that summer. Grandmother (Mema) gave us what little was left in her local bank account. We stretched it a long way. My brother sent regular checks from his job as a welder's helper with the pipeline. My sister-in-law screamed at the baby. My mother was horrified and somewhat helpless. She was paralyzed by the fact that she had finally left my father, a home, and a job. Of course, that really was a small price to pay to keep us from killing him.

I flirted with the local bootlegger who came regularly to the cafe for lunch. What fun! He was good looking, and his wife was reputed to be on the lookout for his running around. So, when she came in, I slipped out the back door and stayed gone until she left. LOL Did she really think a 15-year-old was competition? Probably not, but it was fun for me.

My brother died in November of that year, and I can't even begin to talk about that on these pages right now. After so many years, the pain is still there.

Sue and Mom hit a horse on the interstate coming back from Christmas shopping in Memhphis, and I found bits of glass in my Christmas presents - they were wrapped and in the back of the car at the time. Mom carried a forehead scar the rest of her life, but both of them survived without too much damage. The car was totalled. The horse was dead. Now, they do have fences to help keep the animals off the road. 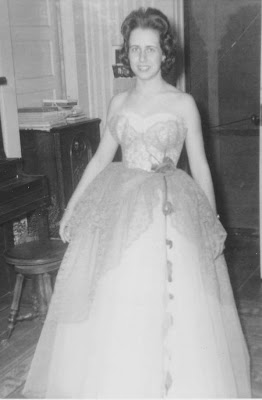 I made friends in school for the first time in my life, and they visited in our home. We had lots of fun that junior year of high school. I had two boyfriends, went to the junior-senior banquet, wrote the prophecy and worked on the school newspaper - including running it off on the ditto machine.

Sue went back to high school with me the following year as a senior. I sometimes rode the school bus and sometimes rode with Sue. Mom got a job as a bookkeeper in a small furniture company; so we were getting by. Marty, the baby, had convulsions with fever and we were so far from a doctor that he lost his hearing as a result of the high fever. He was a good looking tot! Sue remarried sometime that year, and Marty lived sometimes with Sue and husband and sometimes with Mom and me. I started drinking with my next door neighbor that year.

The smoke house behind our house caught on fire that year, and the volunteer fire dept. hoses were rotted; so all we had to wet down the house to keep the fire from spreading was a tiny yard hose. The preacher was screaming, "The house is gonna go, the house is gonna go." Mom was panicking. I told the preacher to shut his damn mouth. So the following revival, I was told that I would join the local Baptist church. The preacher dropped me as he was dunking me, and I personally think it was a deliberate reprisal for my cussing. Of course, the religion didn't last long; they kicked me out the church because I started a teen club where we danced!!!! They said I had to quit dancing or leave the church. So I left. My Mom's buried in their cemetery, but we had a graveside service; I won't go back inside that church.

At Christmas that year, Mom and I went to Texas to see the man who had tried to save my brother's life. We were two days late getting me back to school. The high school principal tried to suspend me for being late. I said cuss words to him because several other girls were not back for school yet. The superintendent of the schools stepped in, converted my trig class to business math and pronounced that I had enough credits to graduate. I had already been accepted at Miss. State College for Women, and so I moved into the dormitory January 1962 and began college classes.

Unfortunately, Mom had her heart set on seeing my walk across the stage and receive my diploma from high school. So, between final exams at college 70 miles away, I traveled back and forth to attend the baccalaureate (Sunday afternoon church celebration of graduation)and Monday night graduation. Then back to college on Tuesday to finish up exams. I made honors that semester. End of installment One
Posted by sharecropper at 12:10 PM

Wow, what a wild ride! I puzzled over the "prophecy" part for a moment, and then I remembered: prophecy = predictions for the futures of everybody in the graduating class.